David Payne's Gr1 Spring Champion Stakes and Gr1 VRC Derby winner Ace High (High Chaparral) commences his campaign this Saturdaywith his ultimate goal being the Melbourne Cup during the spring carnival. Last seen on race day with a fighting second behind Levendi (Pierro) in the Gr1 Australian Derby at Royal Randwick, the $130,000 Magic Millions yearling sale graduate has been readied for his first-up assignment in the $500,000 Gr1 Winx Stakes with two sound barrier trial performances. Second behind Godolphin's Alizee (Sepoy) on August 7 in a Rosehill barrier trial, with Winx (Street Cry) in third, trainer David Payne is under no illusion of the enormity of the task in taking on the world's best horse on Saturday in the race named after herself, but is adamant that the Summertime Thoroughbred-owned 4YO will acquit himself well. "I just want him to run well, finish a couple of lengths off them. If he can finish a few lengths off Winx I'd be very happy," stated Payne (Racing NSW). Ace High is to race in Sydney for the first few runs of his campaign which could see the stallion prospect target races like the Gr1 Chelmsford Stakes, Gr1 George Main Stakes, Gr2 Hill Stakes and Gr3 Craven Plate before heading to south to target the Gr1 Melbourne Cup (3200m). 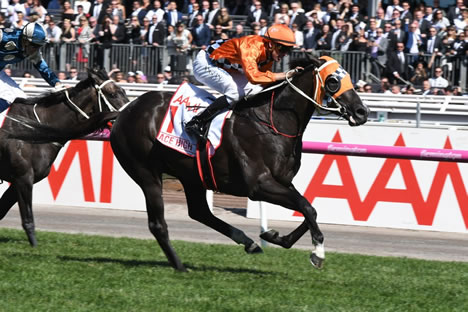