Sheer Talent gives breeders the opportunity to access a group winning son of Redoute’s Choice from one of Australasia’s greatest families, that of Eight Carat. Redoute’s Choice has made his mark as a sire of sires thanks to three time Champion Sire Snitzel, Not a Single Doubt, and several others.

Sheer Talent was given a huge name to go with his immense pedigree, and he lived up to that expectation with a 2YO win over 1400m at only his second start. Plagued by minor injuries, he was sent around in the group company in the spring of his 3YO season, running fifth in over 1200m, but wasn’t seen again until the autumn. Sheer Talent had four starts as an autumn 3YO—all of them in stakes company—and all of them with top four finishes. He won the Gr3 CS Hayes Stakes over 1400m, ran third in the Gr1 Australian Guineas, second in the Gr2 Alister Clark Stakes and fourth in the Listed Manfred Stakes. As a spring 4YO, Sheer Talent had another three starts—again, all in stakes company—and was being set for the Gr1 Emirates Stakes at Flemington. His best effort was to be in the Listed Paris Lane Stakes where he was beaten less than two lengths, but those niggling injuries put paid to any greater plans. Luckily for breeders wanting to target his outstanding pedigree, this makes Sheer Talent affordable. Sheer Talent’s first crop will be 3YOs in 2019/20, with nine of his small first crop having been named to date.

Sheer Talent’s sire Redoute’s Choice hardly needs an introduction. Champion 3YO Miler, multiple Champion Australian Sire of 166 stakes winner, and sire of sires. Sheer Talent is one of three stakes winners for his dam, St. Katherine (by Barathea), with the other two being Saint Encosta (Gr3 Randwick City Stakes), and Kittens (also by Redoute’s Choice, winner of the Gr3 SAJC Chairman’s Stakes, and twice Gr1 fourth). St. Katherine is a half-sister to Gr1 winner Bonanova (dam of Prima Nova, and Bonaichi-dam of Extra Choice), Gr1 winner Fraternity, and Gr1 winner Telesto; and St. Katherine is out of St. Klaire, who in turn is out of a half-sister to the mighty Eight Carat.

Linebreeding to Eight Carat has proven to be successful, and Sheer Talent offers an opportunity for breeders to tap into the same bloodlines that have resulted in Rain Affair, Fair Trade, Obsequious, Quilate (by unraced Bramshaw from an unraced $2,000 mare), Washington Heights, Altar, Peacock, Scream Machine, Satin Slipper, Wink And A Nod, Bandipur and Five All. Gr1 Queensland Derby winner carries a cross of Eight Carat’s third dam Tessa Gillian. 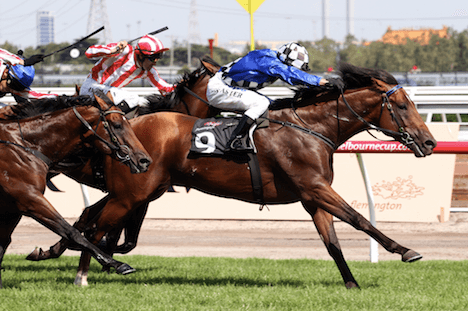 Sheer Talent lived up to his name