Racing fans fell for Lonhro because of his longevity on the track, his will to win, and the way he picked himself up in the Australian Cup to win from an impossible position.

His son, Kementari, has many of the same attributes. Winner of the Gr1 Randwick Guineas, Kementari was also a further five times Gr1-placed and twice Gr1 fourth.

His big heart reflects his sire’s big heart and he took on all the best sprinter-milers that Australia had to offer during his racing career. A winner over 1400m as a 2YO, Kementari really found himself at three, with three wins from nine starts, including that Gr1 Randwick Guineas win and placings in the Gr1 Caulfield Guineas, Gr1 George Ryder Stakes, as well as a win in the Gr2 Hobartville Stakes and the Gr3 Eskimo Prince Stakes.

At four, Kementari was thrown against all comers, and just missed another Gr1 when second to Humidor in the Gr1 Memsie Stakes, and second to Manuel in the Gr1 CF Orr Stakes. He also ran third in the Gr1 Manikato Stakes and fourth in both the Gr1 Winx Stakes and Gr1 Makybe Diva Stakes.

At the time Lonhro won Horse of the Year, he was the only Horse of the Year sired by a Horse of the Year (Octagonal), and he’s taken the opportunities granted to him at stud to rise to Champion Australian sire in 2010-11. With 83 stakes-winners including many Gr1 winners, Lonhro is now emerging as a sire of sires thanks to Gr1 Golden Slipper winner Pierro.

Blessed with paralysing acceleration, Kementari is out of a strong colonial family. His dam Yavanna (Redoute’s Choice) won twice over 1300m, and has also left juvenile stakes winner Telperion (Street Cry) from only five named foals to date. Kementari’s second dam is the Gr3 winner Wild Queen, who showed her soundness in a ten win racing career. This is the family of Gr1 Dubai Golden Shaheen Stakes winner Sterling City, and stakes-winners So Gorgeous, Tipungwuti, and Cumbria.

Redoute’s Choice already has clocked up 91 stakes-winners as a damsire, including Zoustar, Ace High, Levendi, Sacred Falls, and The Mission. The wide range of sires that have worked with both Redoute’s Choice and Lonhro give the impression that Kementari will also work with a wide variety of broodmare sires. 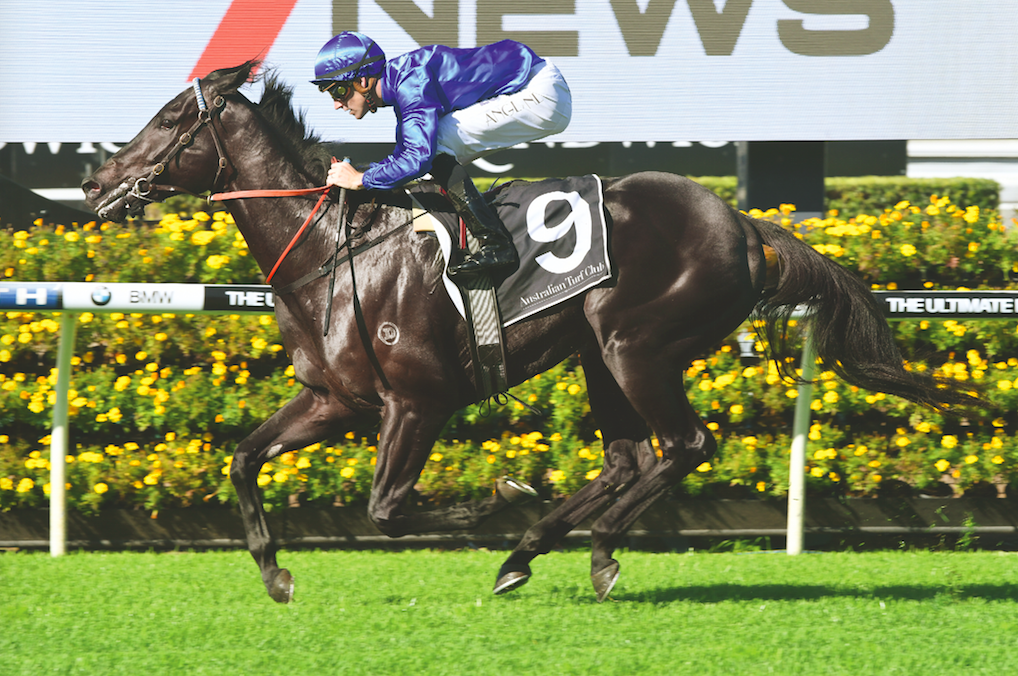 Kementari had a huge will to win (pic: Bradley Photographers)
1st Season